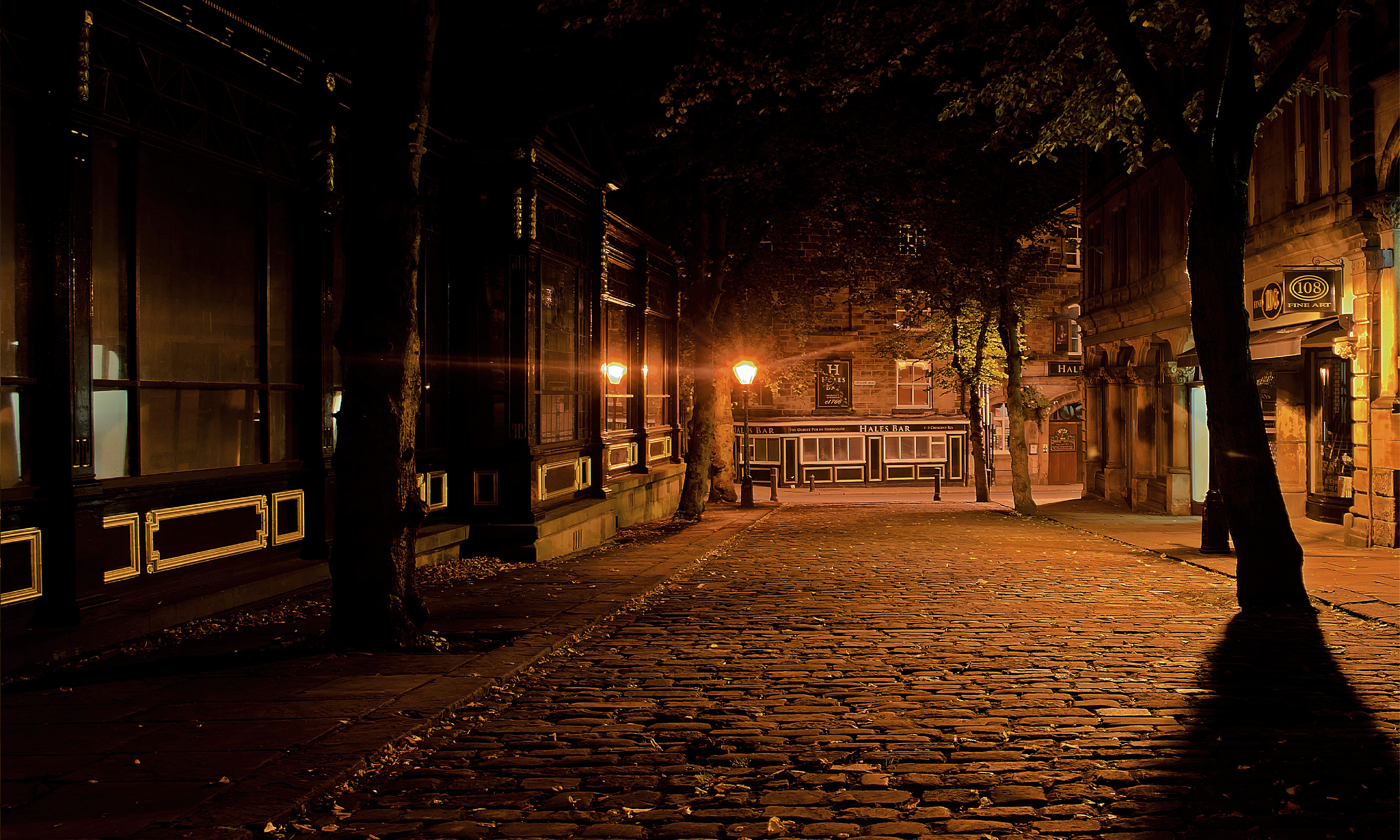 As I flew through the early morning sky I aimed for a time about 200 years in the future. I experienced my customary blackout followed by a glimpse of a dark city filled with tall skyscrapers. On the whole the city looked like a cross between a Goth’s dreamscape and an H. R. Giger painting. I picked a building at random in which to land. After another brief moment of blackness, I fell heavily atop a large stack of baled fabric about 40 feet above the floor. My astral body felt solid as it often does during future travels. Sometimes I can fly at will and other times I can’t. I’m sure there is some astral law of physics which would explain these variations in my abilities, but I’ve never uncovered it. At least my ability to communicate telepathically and read minds was always intact wherever or whenever I traveled. This time around a brief test verified that I couldn’t fly any longer and I was clothed in nothing but good intentions. I flattened myself atop the filthy bales to survey my surroundings. Sometimes I hate future traveling, I mused sourly! Oh well, I was stuck here until my return call arrived from my physical body, so I might as well have a look around, I figured.

Milling about the warehouse I now inhabited were hundreds of shabbily dressed people occupied in packing, stacking, and moving bales of material about the enormous room – on the order of 200,000 square feet I estimated. However, they weren’t alone in their labors. There were men, guards I suppose, clothed in white jumpsuits watching the workers. I studied the scene for about an hour from my high perch looking for some way to get out of what I assumed was a prison. In my current state I couldn’t be injured or killed, after all I had no bones to break or blood to shed. But I could be temporarily imprisoned until my future trip was over, and I was eager to get outside and look around.

Eventually, I noticed that the white clad guards had some manner of ID tag sown into their jumpsuit which allowed them to exit out a side door when they desired. I formed a plan to surprise one of these men and steal his clothes and exit ID. Now I just needed to find a likely candidate. As if in answer to my prayers, one of the guards ducked behind high bale wall out of sight of the workers and his fellows. He looked about to check that the coast was clear, before removing a clear plastic square from his pocket, peeling off the back, and slapping it onto his rolled up right sleeve. He slumped against the wall instantly, a look of bliss spreading across his face. I figured now was my chance to jump him while he was stoned on this future drug.

I launched myself into the air and landed heavily upon my target. His whole body collapsed under my weight, his head striking the concrete floor with a dull thud and the sickening sound of the snapping of a dried branch. He lay still under me. A pool of blood started to collect under his head. Horrified, I realized he was dead or at least would be soon. This wasn’t good, I thought. My intention had been to render him unconscious, not kill him. Perhaps my daughter who is a Physician’s Assistant could do something for him if she were here. She had recently began astral projecting and would’ve come in handy about now. Unfortunately, she was probably hundreds of years in the past. Oh well, now I had to get the hell out of here! There’d be no explaining this murder away. I didn’t know much about this future world yet, but I know killing guards is usually frowned upon in prisons of my time. All I could do for him now was say sorry friend. You should’ve been more careful about getting high at work.

I briefly considered what strange substance must my future body be made of that gives me substance, reality, and obviously weight in this future time? But now wasn’t the time for deep astral science. I rolled the dead man over and looked his jumpsuit over. There were no visible zippers or seams to be undone. In frustration I started tugging on the plastic/cloth hybrid-feeling garment when a seam suddenly appeared like an unexpected parting of the Red Sea! I pulled the suit off my victim and put it on my solid astral body. It seemed to form fit about me, with the seam disappearing once I ran my hand up the middle of the future jumper. On my right side a silvery metallic object that looked like a cross between a gun and a medical instrument was held in place by some kind of magnetic force. I detached the silvery object and looked at it briefly before securing it back on my side. It looked complicated, and I hoped I wouldn’t need to use it. I slid on the plastic shoes which were form fitting as well.

Picking up the hard hat that had been knocked some feet away by the force of his collapse onto the floor, I slid the brim down over my forehead to conceal my features and made a bee line to the exit I had spotted previously. I had no problem opening the door as I just repeated what I’d seen the other guards do as they allowed the beam at the door to scan the metal disk on their right breast. Once outside there was a long staircase leading sharply upwards from the outside loading area to the street level. I quickly climbed the stairs easily, but felt strangely woozy near the top. I knew the feeling was my astral self attempting to call me back to the twenty-first century. I fought the signal with all my force of will. I hadn’t come this far to go back without exploring my surroundings.

Returning to normal consciousness, I finished scaling the stairs. Down below an alarm was sounding and all hell was breaking loose. I decided it was a good time to start running as fast as I could away from this prison factory.

I raced through the streets seeking out the darkened alleys as the main streets were lit by free floating balls of brilliant light. These floating beacons must’ve had sensors of a sort, as the light grew much brighter as I approached and dimmer as I retreated. A low hum likewise grew and died away in a similar fashion during each passage beneath these hovering street lights. I would’ve liked to have stopped and examine them more closely, but the sound of footsteps and vehicles were coming too close for idle tourist gaping.

As I ran the buildings shrank in size from towering behemoths to a few stories. One curiosity I observed as I fled was that the entire city seemed to be formed by a mold. Each building rose and fell interconnected and formed by a black obsidian material. It wasn’t like in my time where buildings are constructed one at a time. These blocks appeared to be the result of an unknown building material that had congealed in some giant mold and been put into place all at once fully formed.

I encountered no one on the street as I ran. I chalked that up to the lateness of the hour or perhaps some curfew. However, as I jumped over a hedge to proceed to the next block a woman in a brown nightdress stuck her head out of a window and spoke to me.

My telepathy told me she was asking me who I was. I also detected a thought of turning me in for a reward.

“I need help. I escaped from the prison. I’m new to this city,” I replied telepathically. I also projected feelings or warmth and friendship towards her, hoping to win her over as an ally.

She gave me the puzzled look many future folks do when I project my thoughts into their minds. They understand what I’m saying, but the absence of sounds received by their ears always causes momentary confusion.

“U EzMerik?” She asked uncertainly. I now sensed her profit motive was wavering for an unknown reason.

My best guess from her surface thoughts was that she was asking if I was a citizen of East America. I felt her identification with this label, and thought it best to answer positively as the best chance of securing some help in this alien, and so far hostile new world.

“Cominden. Race!” She whispered, waving me inside.

This was the best offer I’d had since I landed in this future, so I hurried in. Her thoughts were flooded with fear, making them harder than usual to read. I hoped she had discarded her original idea of profitable betrayal.

Once inside she closed the door and slid her hand over a device at waist level by the doorway. A hidden latch became engaged.

“I’m afraid I killed one of the guards by mistake when I stole these clothes,” I replied. Luckily, my telepathy assisted me in decoding this highly clipped remnant of the English language. Of course, asking why I was being chased is probably the first question I’d ask too in the same circumstance.

She reacted oddly to my answer. At first a smile of joy came over her face, quickly followed by a realization of the danger she had now put herself in.

My savior looked about her small apartment for her next move. As she did I noticed she was about 6 feet tall, and very thin with a drawn face from hunger or persecution – most probably both.  Her hair was brown and cut in a bob, and I estimated she was in her mid to late 30’s. The inside “furnishings” appeared to have been molded as a single piece as well. There was a small kitchen table jutting up from the floor surrounded by 4 barstool-like seats. Along the walls a shelf extended at a height that would allow an average sized person to sit comfortably or used as shelf space.

Having decided upon her strategy she motioned me towards an empty wall. From a hidden pocket in her clothing she pulled a cylindrical device. The rod emitted a whining pitch as she ran it along the obsidian wall. A space large enough for a small walk in closet emerged from nowhere. I gasped in surprise at the sudden appearance of this hidden room, as she motioned me inside. I had half a mind to refuse, but the sound of activity outside was rising and I didn’t have any better ideas at present. I walked into the closet and turned about.

She was preparing to seal me in when a vital question came to my mind. “What year is this?”

Another quizzical expression came over her features. “Diz 2257”.

Darkness enveloped me as I adjusted to her shocking revelation. I was nearly 250 years in the future! I began to review everything that had happened to me since I arrived in this strange, new United States. Interrupting my revery, the homing recall beacon from my body in the past was calling me home. I descended into blackness.

More to come as soon as I can return!

Astral Uber or Can You Take Me Out of My Body?

I Possessed My Alternate Self