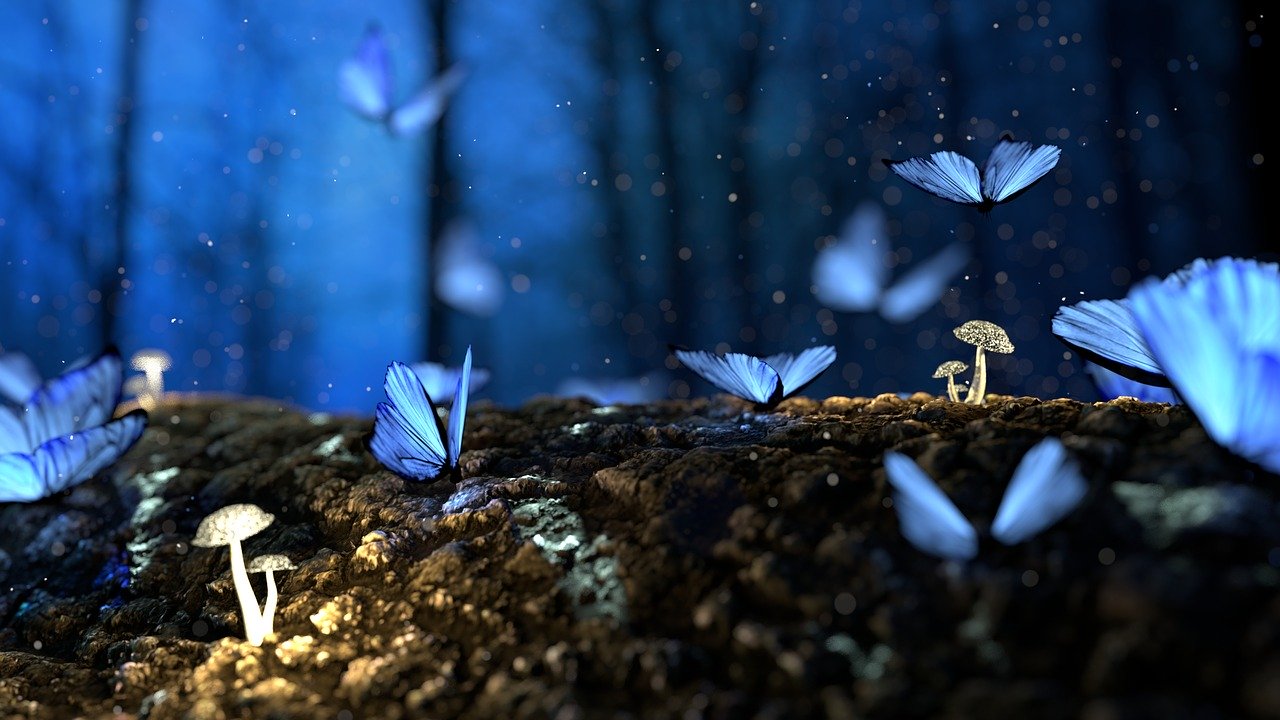 After I left my physical body last night, I decided to find out if I ever had a non-Earth
incarnation. After a period of blackness, I found myself in the body of what might best
be described as a giant butterfly. Surrounding me high over deep canyons, were a
swarm of my brothers. We were approximately 3.5 to 4 feet long, with wingspans about
twice that size.

I say brothers, because I could tell by the smell or perhaps pheromones, that there
were no females in our immediate soaring group. They were, however, somewhere
close by watching us.

We were a group of a hundred or so adolescents preparing for our rite of passage – and
to impress the “ladies” by demonstrating our strength, flying skills, and bravery by
rocketing through the “Canyons of Death”. Those that survived would become mature
swarm members, and would then join the females to mate.
Our “tribe” was self-aware and intelligent, but we had no tools or indeed anything like
opposable thumbs. Our people were on par with primitive man before the harnessing of
fire. We didn’t have any elected leaders. Rather, the older and more experienced adults
lead us through winding scent trails to the large flowering plants during the time they
were ripe with sweet nectar. Our world was full of jungles, with many delicate, lovely,
and juicy plants. Of course, the canyons of the high plateau were much different. They
were devoid of any succulent greenery, having only life forms that we might compare to
Earth moss and lichens. High winds whipped through these crags, cold in the dim times
of the year, and warm during the bright days. Now the winds were changing from cold to
warm, and the temperature fluctuations caused whirlwinds to form spontaneously, and
to dissipate just as quickly.

As we hovered above waiting for the first to begin their steep dive into the dark, wind-
swept chasms, I felt a sense of awe, excitement, and a very real undercurrent of fear.
For it wasn’t just the breakneck speeding dive that I and the others feared. No, the
things we feared the most were the “death-suckers”, and their webbed snares spun
haphazardly throughout the canyon system. The web spinners were spider-like, larger
than us, and fed off my kind just as Earth arachnids do now. They were normally solitary
hunters found throughout the world, but during this time of the year they came together
to feast during our adolescent trials. I could see the black hunters skittering about on
their swaying webs far below, readying themselves eagerly for the start of their awful
feast.

The first three brothers sensing the time had come, to start the ages old ritual, went into
their steep dives. I and several others folded in our wings and dove, forming up behind
them. The trick to surviving the dive, I knew, was to fly at maximum safe speed. At that

blinding pace the webs were easily broken through. Go too fast, however, and you’d
tear a wing or lose control. High speed crashes onto the jagged, rocky floor claimed
many of my winged brethren as well. Their decaying carcasses littered the canyon floor,
testaments to their bravery, and to their failure. Fly too slowly, of course, and you’d
become entangled in the deadly webs. Everyone knew once you became trapped in the
death-eater’s snares, you’d never rejoin the tribe.

The lead brother was performing skillfully and easily ripped through the white webbing. I
rejoiced for him. The second was close on his tail, and succeeded as well. I was only a
few seconds behind my third tribesman when disaster struck. One of the death -suckers
had crawled onto the web mid span, and was rearing its hideously bulbous body up
menacingly. Number three cut his speed in fear, and vainly tried to pull up. But he was
going much too fast for this desperate maneuver. He collided into the creature’s web full
on, and became stuck. My body slammed into his a split second later. White hot pain
and shock filled my senses. My final sight was of the death sucker rearing up and
sinking its fangs deeply into my battered torso.
When I returned to my Earth body I thought about the lessons of that life. Our tribe was
simple and uncomplicated, but we functioned as a unit that depended and worked
together. It was a simple and fairly short life, but I learned lessons of trust, bravery, and
unity.

Astral Journey to the End of the Earth